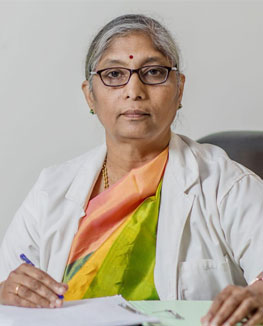 She also held the post of Secretary of Indian Association of Medical Microbiologists (IAMM), AP Chapter from 2006- 2009. She was the Organizing Secretary of XVI IAMM State Chapter in the year 2013 and President of IAMM State Chapter 2013 - 2014. She was awarded Best Service Award by the District Collector, Visakhapatnam. She also has undergone an advanced programme in Medical Education.

After retiring from Govt. Service in the year 2014, she rendered services at GEMS, Srikakulam as Professor of Microbiology, Vice-Principal and was Principal, GEMS, Srikakulam from 2015 to 2018. She was Organising Secretary of Andhra Medicos Annual Research Assembly (AMARA) for two consecutive years at GEMS, Srikakulam. She is the Co-chairperon of the Multi Disciplinary Research Unit (MDRU) of Andhra Medical College. She joined GIMSR as Professor of Microbiology in January 2019 and at present is the Principal of GIMSR.

Dr. VVL Narasimha Rao graduated from Guntur Medical College in 1980. He subsequently pursued his Post Graduation in Ophthalmology in same college and completed D.O in 1983 and M.S in 1988. Dr. VVL Narasimha Rao was selected for Govt. Service in1982 and he worked as CAS, Eye Specialist from 1984 to 1986 and joined as Assistant Professor in Ophthalmology Guntur Medical College in 1988. He was later transferred to Andhra Medical college in 1991 and continued as Ass istant Professor in AMC. He was promoted as Associate Professor, Andhra Medical College in 2006 and as Professor in 2011 in the same college. He was Posted as Superintendent, Govt. Regional Eye Hospital, Visakhapatnam in 2012 and he continued in the same post until his retirement in July 2020. Dr. VVL Narasimha Rao underwent training in IOL Surgery in Govt. Regional Eye Hospital, Visakhapatnam and Phaco Surgery in Sarojini Devi Eye Hospital, Hyderabad.

Dr. VVL Narasinha Rao has vast experience in performing all varieties of Ophthalmic surgeries. He introduced first IOL surgery in Regional Eye Hospital, Visakhapatnam in 1992 and first Phaco surgery in G.G.H Guntur in 2004. He developed all Specialty clinics in GREH from 2014. During his tenure as Professor & Superintendent, he developed GREH in all aspects like P.G Training, infrastructure development, Acquiring all modern equipment to institute on par with corporate hospitals. GREH stood first in Andhra Pradesh in academic performance as well as achieving surgical targets during his tenure. He conducted several International clinical trials in Ophthalmology in GREH, Visakhapatnam.